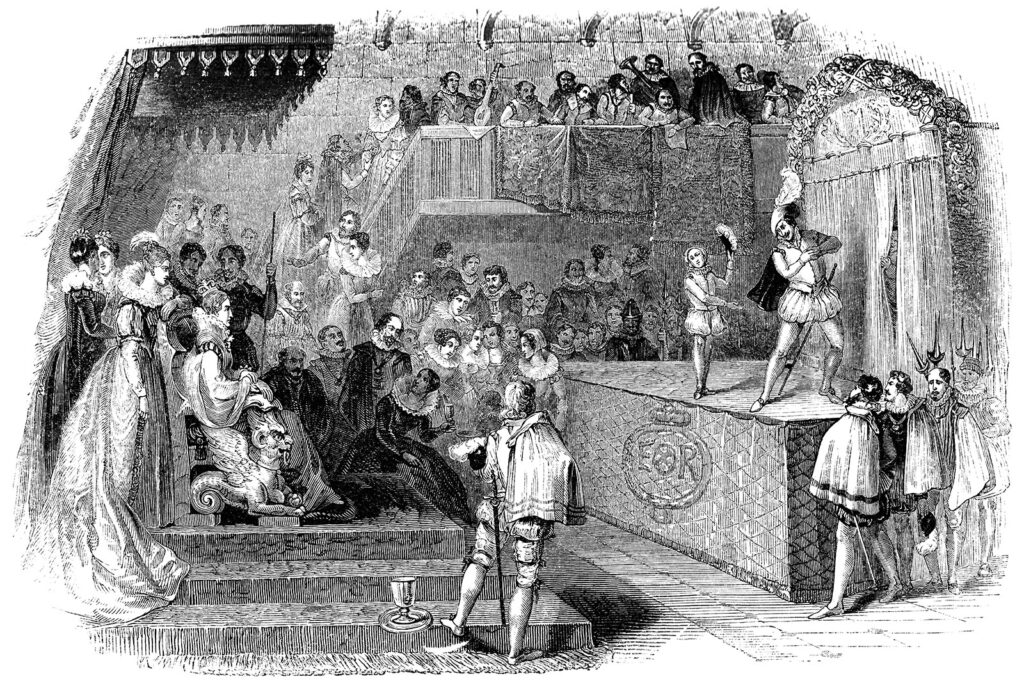 Where it all started…

In 1578 John Florio published his first work, First Fruits, which contains four dedicatory poems written by the whole company of the Leicester’s Men. They are Richard Tarlton, Robert Wilson, Thomas Clarke, and John Bentley. They thank John Florio for having contributed to bring the Italian novelists to the English theatre. The dedications prove that Florio was in contact with the theatre company long before William Shakespeare’s arrival in the town; the poems indicate that Florio was the tutor and master of the theatre company and had a collaboration with them with the plays. Giulia Harding and Chris Stamatakis 1 have argued that John Florio was part of a “theatrical network” with the company of the Leicester’s Men. Stephen Greenblatt2 also asserts that there is evidence that “already in the early 1590s he [Florio] was a man highly familiar with the theatre.”

Richard Tartlon in prayse of Florio

“If we at home, by Florios paynes may win,

to know the things that travailes great would aske:

By openyng that, which heretofore hath bin a daungerous journey,

and a feareful taske. Why then ech Reader that his Booke doe see,

Give Florio thankes, that tooke such paines for thee.”

Richard Tarlton was an English actor of the Elizabethan era. He was the most famous clown of his era, known for his extempore comic doggerel verse, which came to be known as “Tarltons”. He helped to turn Elizabethan theatre into a form of mass entertainment paving the way for the Shakespearean stage. After his death many witticisms and pranks were attributed to him and were published as Tarlton’s Jests. Tarlton was also an accomplished dancer, musician and fencer. He was also a writer, authoring a number of jigs, pamphlets and at least one full-length play. Discover more about Richard Tarlton.

The Theatre, 1576-98. The Theatre is labelled in the top right of this London street map.

It was in the period Florio was writing First Fruites that the first public theatre in England was opened in London by Richard Burbage in 1576. The Theatre opened in 1576, staging plays until its closure in 1598. Located at Shoreditch, the playhouse was built by James Burbage, who called it the ‘Theatre’ to evoke the idea of a Roman playhouse or ‘theatrum’. It became hugely popular with the first London playgoers. Discover more about The Theatre.

Robert Wilson in prayse of Florio

May quickly florish in our English fieldes,

if in this woorke we take but easie toyle.

He sets, he sowes, he plants, he proynes with paine,

And geues vs (idle) both the stocke and graine,

even his firste fruites the ioy of labouring handes.

We geue hym nought, if we can not deuise to giue him thankes,

that may hym wel suffice.

In Palladis Tamia (1598), Francis Meres mentions Wilson along with Tarlton, and specifically connects Wilson with the Swan Theatre, which was built c. 1595.

JOHN BENTLEY IN COMMENDATION OF HIS FRIEND I.F.

You English Gentlemen that craue,

the fine Italian tongue to knowe:

And you Italians that would haue,

a Rule the English speach to showe:

Howe you the grounde of both may reach.

John Bentley, friend of John Florio, was a leading actor in the Leicester’s Men and in the Queen’s company (established 1583), the most important dramatic organization of its time. Evidently he had a great contemporary reputation: twenty two years after his death, he is still known as “inimitable Bentley.” In the image: The Famous Victories of Henry V (c. 1583), one of the most successful plays performed by the Queen’s Men. It has twenty speaking parts in the first 500 lines; and the plays that were to follow, including histories written by Shakespeare, are constructed on a similar scale.

THOMAS CLARKE IN COMMENDATION OF FLORIO

no taken toyle is voyde of gaine:

No grounde so barren, but the seede,

For paine? why then should FLORIO feare,

To reape the gaine, he merites heare.

Which gaine, is onely good report,

and honour due for taken toyle.

Which graunt hym wyl the wiser say so,

for whom he tylles this fertile soyle.

And settes the slips in English lande,

of Tuscane tongue, to spring and stande.

As for the rest, if they requite,

his labour yl, what may he say?

I have this done for their delight,

and they for paine disdaine me pay.

Ma non importa, sith this so,

The same in French.