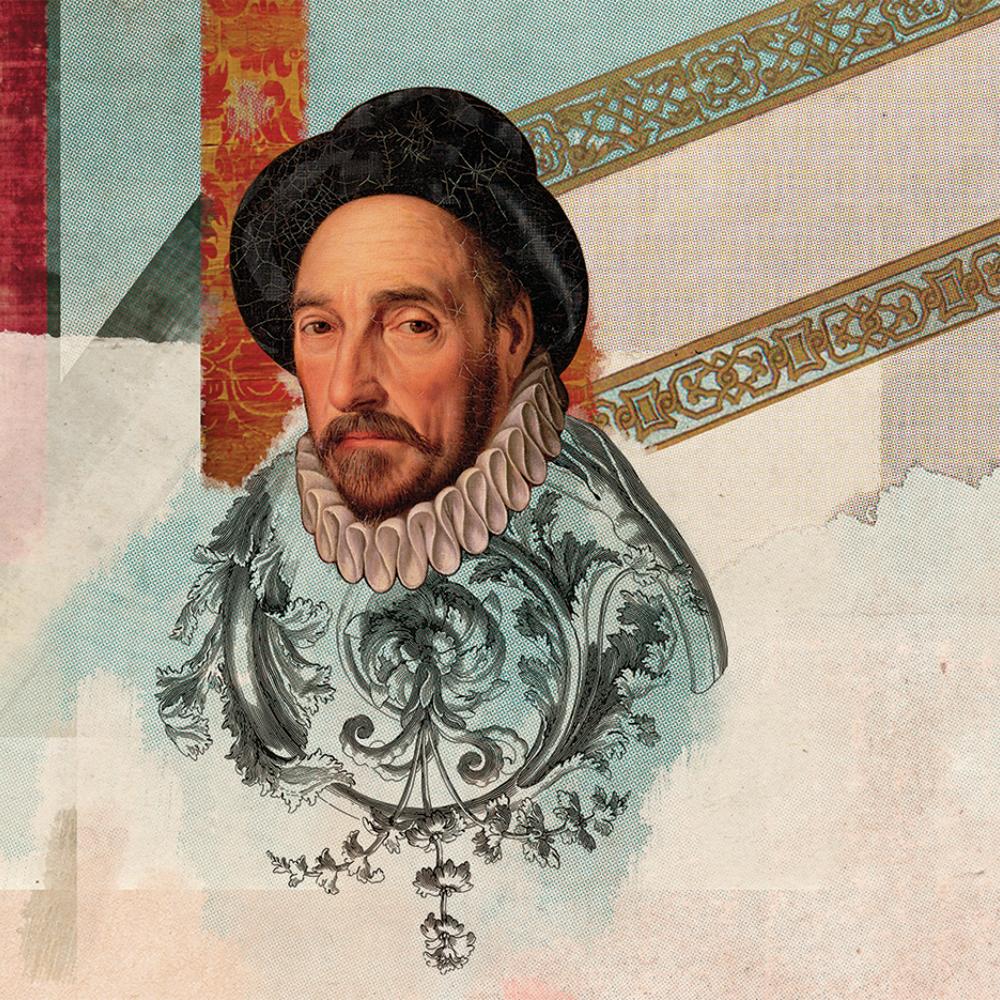 It is widely known that Gonzalo’s speech in The Tempest 2 corresponds to John Florio’s translation of Montaigne, specifically the essay “Des Cannibales”:

“It is a nation, would I answer Plato, that hath no kinde of traffike, no knowledge of Letters, no intelligence of numbers, no name of magistrate, nor of politike superioritie; no use of service, or riches or of povertie; no contracts, no successions, no partitions, no occupation but idle; no respect of kindred, no use of wine, corne, or mettle. The very words that import lying, falsehood, treason, dissimulations, covetousness, envie, detraction, and pardon, were never heard of amongst them. How dissonant would hee finde his imaginarie common-wealth from this perfection?” 3

Michel de Montaigne-Delecroix (1533–1592), French author. John Florio translated Montaigne’s Essays in English, considered the greatest work in prose of the Elizabethan period. It has been proved that Shakespeare was influenced by John Florio’s Montaigne both before and after its publication.

I’th’commonwealth I would by contraries

Execute all things. For no kind of traffic

Would I admit, no name of magistrate.

Letters should not be known. Riches, poverty,

And use of service, none. Contract, succession,

No occupation: all men idle, all,

Sword, pike, knife, gun, or need of any engine

Would I not have;”

There are also other moments, notably in King Lear, that make it clear that Shakespeare had read him. In King Lear it’s Edmund – the bad one, remember – who borrows from Montaigne’s thoughts on fatherhood; while in Hamlet Polonius – some of whose advice echoes Montaigne – is a windbag. 4

Both Shakespeare and John Florio are influenced by Montaigne and employ a “similar emphatic, spare style to outline the characteristics and merits of a kind of Utopian society, rich in natural abundance and with no need of artificial constructs, even down to word for word correspondence between the two texts.”5

In 1925, George Coffin Taylor published the book Shakspere’s Debt to Montaigne6 presenting parallels between Shakespeare and John Florio’s Montaigne. It notes overlaps in “vocabulary, phrases, short and long passages, and, after a fashion . . . also in thought”.

“First, that . . . group of passages in the Florio Montaigne and in the plays of Shakspere written during 1603 and after, so similar in phraseology as practically to preclude all possibility of doubt. Second, another group of passages and phrases in the Florio Montaigne and in Shakespeare’s plays written during and after 1603, which, though not so strikingly similar in phraseology as to preclude all doubt, are yet similar enough to make one feel that the Shakspere passage could not have taken on its final form unless Shakspere had made the acquaintance of the Montaigne passage. Third, a list of approximately seven hundred and fifty words and phrases from the Florio Montaigne used also by Shakespere, but never in any composition of his antedating 1603 – many of them, if one may judge from the Oxford Dictionary, never used by anyone before 1603.“

“When the number of expressions in Shakspere, and the number of the thoughts in Shakspere, which could never have taken on their final form but for a previous reading of Montaigne, [translated by John Florio] are borne in mind, it may well be asked whether any other single work that Shakspere read influenced him in so many differerent plays and in so great a variety of ways – words, phrases, passages, thoughts.”7

In an early review of Taylor’s book, T. S. Eliot was particularly impressed by the third list of Taylor, consisting of ‘words and phrases numerous enough to create a presumption that Shakespeare picked them up from Florio’.8 Eliot also praised Taylor for focusing on parallel words rather than on thoughts.

Shakespeare’s scholar Jonathan Bate has claimed that ‘it was this [Montaigne’s] book, perhaps above all others, that shaped the mind of Shakespeare in the second half of his career’.9

In his article “Montaigne and Shakespeare: two great writers of one mind“, Jonathan Bate also asserted that John Florio’s translation of Montaigne’s Essays had an impact on Shakespeare’s plays even before the publication:

“His reading of Montaigne in Florio’s translation some time before the writing of Lear gave him a philosophically articulated basis for his own long-standing practice.“

Jonathan Bate doesn’t explain how Shakespeare knew the translated work before the publication:

“Scholars debate whether or not Shakespeare saw John Florio’s translation in manuscript before it was published in 1603. The balance of evidence suggests that he probably did not, but rather that his mind and Montaigne’s worked in such similar ways that the character of Hamlet, created before 1600, seems like a reader of Montaigne even though he could not have been.”

In his recent book, How the Classics made Shakespeare10 Jonathan Bate asserts that it is possible Shakespeare knew Florio’s translation of Montaigne’s Essays before its publication thanks to some manuscripts. 11

JOHN FLORIO’S MONTAIGNE: THE WORK OF A DRAMATIST

Stephen Greenblatt notes, in his introduction to his edition of John Florio’s translation of Montaigne, that there is often a Shakespearean feel to John Florio’s prose style. 13 Francis Otto Matthiessen, in 1931, published Translation: an Elizabethan art14 making an extensive analysis of Florio’s translating method, pointing out the similarities between the Anglo-Italian and Shakespeare’s style. For Matthiessen, Florio alters Montaigne for the sake of a fuller picture, the desire for a feeling of motion is the force underlying nearly all Florio’s additions, and he always wants to increase the emphasis, to heighten and magnify. In practically every case these alterations of Florio’s are dictated by a theatrical sense.15

Florio’s habit of seeing and saying things dramatically is one of his most distinctive qualities:

“The dramatist’ method, therefore, consists in taking a situation and heightening its pitch by a skillful exaggeration of tone and by a hint of action in the swing and cadence of his words. Such also is Florio’s method, and it permeates his treatment of Montaigne.”

Matthienssen also points out that:

“Florio’s sense of the dramatic is the central force molding his prose. It determines not only the manner in which he builds upon Montaigne’s situations, but also his addition of words, not for their meaning, but for their rhythm. When Florio heightens the content, sometimes it is the splendor, sometimes the pathos, more often the sheer excitement of the situation that catches him.”

For Matthiessen, sometimes Florio is no longer translating, but envisaging the scene anew. In any situation it is the element of contrast that focus his attention, and he develops them “with the instinct of the dramatist, doing everything he can to heighten the effect.” 16

With his analysis, Matthiessen underlined the stylistic similarities between the Anglo-Italian and Shakespeare, and asserted that “it would be dangerous to press too far the striking similarities in speech and thought”17, and concluded his analysis by stating that Florio and Shakespeare “were constantly talking with the same people, hearing the same theories, breathing the same air.”18