It has been suggested by some Shakespeare’s scholars that The First Folio was a project organised by Ben Jonson and John Florio. 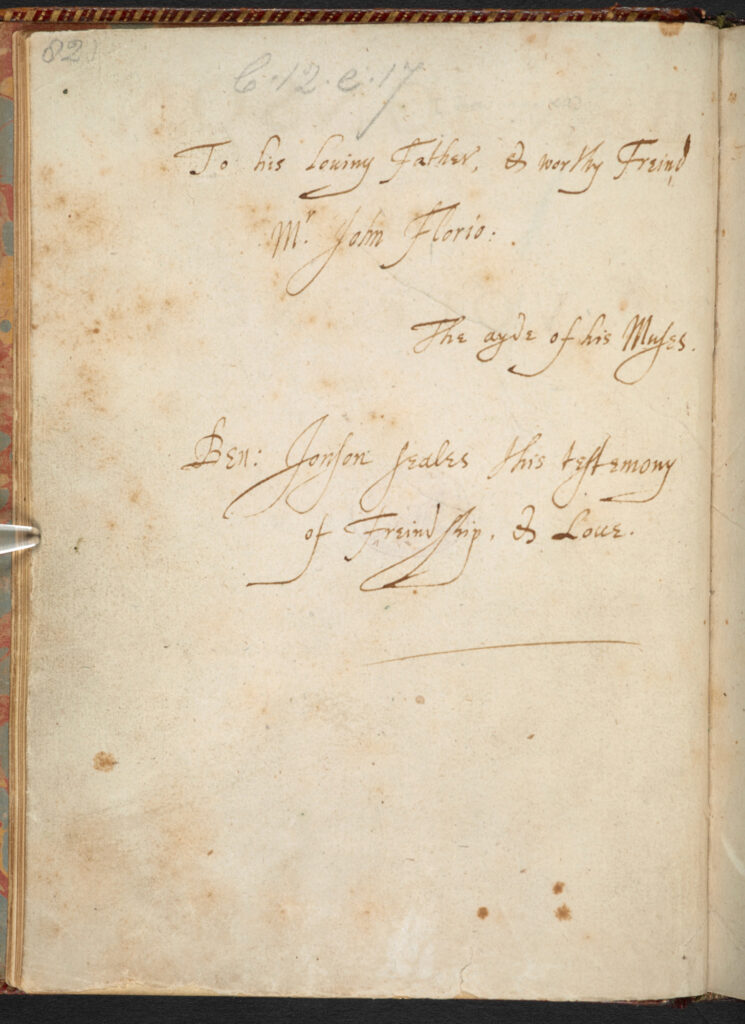 John Florio’s friendship with Ben Jonson is of great interest and importance. It is well-attested by an inscription written in Jonson’s own hand upon the fly-leaf of a copy of Volpone which is now in the British Museum:

“To his louing Father, & worthy Freind, Mr John Florio: The ayde of his Muses. Ben: Jonson seales this testemony of Freindship, & Loue.”

The word “Father” which the dramatist uses in addressing his friend, suggests not only the disparity in their ages. It most importantly implies some suggestion of discipleship, with a more striking tribute by speaking of him as “The ayde of his Muses”. This dedication implies that Florio played a fundamental part in Jonson’s theatre writing which has not been fully investigated. The dedication certainly implies that the comedy Volpone was written in collaboration with John Florio.

It has been suggested by some Shakespeare’s scholars that The First Folio was a project organised by Ben Jonson and John Florio.

In an article published in The Guardian, Saul Frampton set out a case that John Florio may have anonymously played a role in producing the first collection of Shakespeare’s plays.1 Modern scholars agree that actors John Heminges and Henry Condell, traditionally considered the Folio’s assemblers, were unlikely to have been entrusted with editing the expensive, 900+ page volume. Frampton quotes scholar Eleanor Prosser:

“Somewhere behind the Folio … lies a conscientious and exacting editor with literary pretensions,” one “more experienced in the transcription of literary than of theatrical works.”

Frampton, author of a book on Montaigne (whose Essays Florio translated into English) and an upcoming work on Shakespeare and Florio, finds significant correspondences between words Florio used in his writings of the 1570s-1610s and revisions made to the 1623 Folio versions of Shakespeare’s plays. Frampton notes:

“Perhaps the most disturbing aspect of Florio’s possible involvement with the Folio is that we may never know its true extent.”

While earlier editions of many Shakespeare plays exist for comparison, about half the plays had never previously been published, and:

“We cannot tell for certain whether the words were written by John Florio or by William Shakespeare.”

Eric Rasmussen, University of Nevada, in his article “Who edited the Shakespeare First Folio?” 2 examined two possible candidates as editors of the First Folio: Leonard Digges and John Florio.

Rasmussen ended his analysis by stating that he undertook this study intento upon “proving that Leonard Digges was a more viable candidate than was John Florio” but “the data, preliminary though it is, does not support this conclusion”:

“Indeed this proto-study in editorial attribution provides evidence that Florio’s stylistic habit more closely resemble those of the editor of First Folio than do Digges’s.”

“In 1620, John Florio translated Boccaccio’s Decameron anonymously. The printer, Isaac Jaggard, and the dedicatee, Sir Philip Herbert, Earl of Montgomery, will be the same protagonists of the publication, in three years time, of Shakespeare’s celebrated Folio”4

Writer and professor at Ca’ Foscari in Venice and at Hautes études Internationales et politiques in Paris, Jeremy Lester suggested that John Florio was not just the editor of Shakespeare’s First Folio, “but perhaps the author of these works himself? Might this explain why he had the temerity and the confidence to make wholesale changes in his editorial work precisely because he was at the end of the day editing his own work?” 5

A document that proves John Florio was involved in the production of the First Folio is a letter he wrote in 1623 to Lord Cranfield, Lord Treasurer, asking to have some money to “finish and publish my greate and laborious worke, for which my Contrie and posteritie so long as English is spoken, shall have cause to thank, and remember your Lordships Honorable name, that fostered the Muse of your most humble poor servant J. Florio.“6

Some Florio’s scholars, like Miss Frances Yates, have erroneously tried to suggest that in this letter Florio is referring to his third dictionary. This is not correct for a great number of reasons: A note attached in the 1623 letter confirms that John Florio received the money he asked to Lord Cranfield:

“We see by this record petition that the request had been productive of effect, & procured him some relief from the Lord Treasurer.”

It is illogical to believe that John Florio, who asked to receive money in 1623, and received them in the same year, waited more than thirty years to release a third dictionary who wasn’t even published under his own name, but by Torriano, a writer who John Florio, in 1623, didn’t even know personally.

Furthermore, John Florio, in the 1623 letter, doesn’t cite the work as “dictionary”, he cites it as “laborious work”, implying it was an important task he had undertaken anonymously and couldn’t mention in a letter, perfectly knowing he was working as ghostwriter, as he already did in 1620 with the Decameron.

This letter should serve as proof of Florio’s involvement in the editorship of the First Folio.