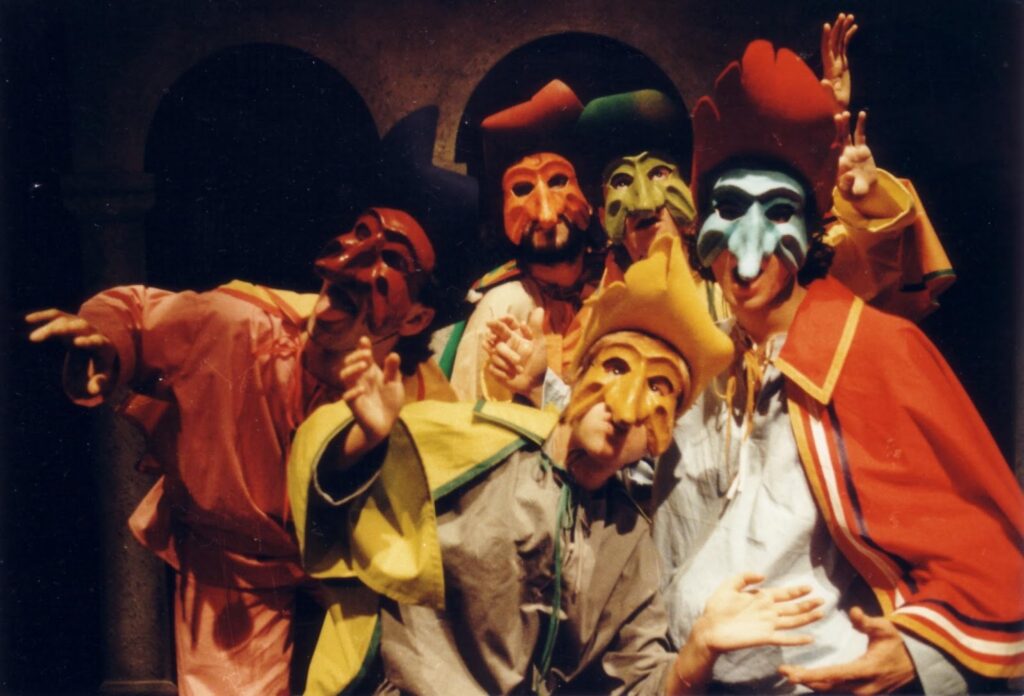 Mary scholars agree that Shakespeare incorporated Commedia dell’Arte in his plays, an Italian form of comedy that was often improvised, into many of his plays, using plots and characters from Italian sources 1

For example, the first appearance of the word “pantaloon”, a famous character from the Italian Commedia dell’Arte, appeared in the English language in The Taming of the Shrew2

The first publicly hosted event was the comic play Gl’ingannati, written collectively by the Intronatis. A characteristic of the Academy was its preference for comedy and the targeting of a female public. This distinguished the plays of the Academy’s first wave of productions.

Viola/Cesario relationship in Twelfth Night is the same exact relationship of Lelia and Fabio of Gli Ingannati.

Gl’Ingannati, an Italian play about twins and mistaken identity. There is no concrete evidence Shakespeare saw the play. The contemporary diarist John Manningham noted similarities in his diary record of a performance in 1602. It was, he wrote, “most like and neere to that Italian called Inganni”. John Florio owned this play in his library and borrowed many words from the comedy for his works.

John Florio owned this play in his library and borrowed many rare, strange words from the comedy for his works, translating and adapting the Italian vernacular for the English readers. Some words he borrowed from Gl’Ingannati can be read below:

Clemenzia, Lelia’s nanny, in Act I, scene II, says the word “Cantepolare” which Florio translates it as “To keep a filthy singing”

From Act II, scene ii: “Andar in frega, to go a catterwalling, to be lecherous or proud, to go to rut. Andar in amore, as Andar in frega.”

It also well known that John Florio used Italian Commedia dell’arte to write the dramatic dialogues of his First Fruits and Second Fruits:

“The dialogues he [John Florio] wrote offer dramatic scenes which owe something to Cinquecento Italian comedy, […] organised as a parameological struggle or servant-master dialect that has something in common with the conversational dynamic developed in certain scenes in Elizabethan’s theatre” – Warren Boutcher, New Documents on John Florio, in Reformation, 1997.

William N. Nest notes, in a discussion on Jacobean theatre, how the “dramatic potential” of Florio’s bilingual language lesson manuals could be brought to the stage.” 4

Therefore, John Florio didn’t just own the Commedia dell’arte plays and comedies that Shakespeare extensively used during his career, but he was also capable of borrowing material, translating it and adapting it for his English dramatic dialogues. In the same way, Shakespeare used the plots of Commedia dell’arte, reading the books in Italian, translating them and adapting them for the English audience.

Many Shakespeare scholars have pointed out the similarity between the characters Launce (Two Gentlemen’s) and Launcelot (Merchant of Venice) with their original source: Ruzzante, Angelo Beolco.

Angelo Beolco, known as Ruzzante, was an actor, a singer, an author and director of comic plays, among the most famous figures in Italy in his role of the Zanni in the Commedia dell’arte. His works are written solely in Paduan dialect and made the role of the peasant an extraordinary comic spirit, which made him one of the most famous celebrities of the Italian 16th century.

Dario Fo, one of the most prominent leading figure of Italian theatre and expert of Ruzzante, in his shows throughout the world has always underlined the similarity between the Shakespeare and Ruzzante. Like the scene fromRuzzante’s comedy Anconitana, that for Dario Fo inspired Shakespeare for his Midsummer Night’s dream.

Love labour’s lost contains one of the earliest examples in English of the use of the word ‘Zany’ from Zanni. Clearly Shakespeare takes the word to mean ‘Servant’ ‘Follower’ or ‘Imitator’ as well as ‘Clown’. Once again, Shakespeare borrowed an Italian word and translated it in English for his play.

Robert Henke, professor of Comparative Literature and Performing arts of Berkley university in California, expert in Shakespeare and the study of Renaissance and Commedia dell’arte, has found connections between Shakespeare and Ruzzante in relation to the representation of poverty in 16th century. In his book “Ruzante and Shakespeare: A comparative case study” 5 Henke discusses the similarity between Shakespeare and Ruzante. Ruzante’s monologue in Moscheta in which he jokes with his shoes talking about death and love and his monologue in Anconitana with a dog has been compared with Launce’s monologue in Two Gentlemen’s in which the character uses the same devices and humoristic style of Ruzzante.

In this way, Robert Henke demonstrated that Shakespeare was heavily influenced by Italian Commedia dell’arte and particularly Ruzzante’s works 6 , written in Italian and Paduan dialect and not translated in English at the time. Shakespeare even borrows from Ruzzante the Italian curse word “Cancaro”, that John Florio translates as “Crab”, the name of Launce’s dog in Two Gentlemen, the same character inspired by Ruzzante’s work.

Robert Henke explains that John Florio is the most likely candidate to be the source of Shakespeare’s knowledge of commedia dell’arte and Ruzzante.

Listen to this interview in which Robert Henke explains the important influence of Commedia dell’arte and Italian novels in Shakespeare’s works and the connection between The Bard & John Florio:

Angelo Beolco, known as Ruzzante, was an actor, a singer, an author and director of comic plays, among the most famous figures in Italy in his role of the Zanni in the Commedia dell’arte. His works are written solely in dialect and made the role of the peasant an extraordinary comic spirit, which made him one of the most famous celebrities of the Italian 16th century.

Shakespeare’s only other direct references to the Commedia dell’arte masks shows most clearly his acquaintance with them. It is found, of course, in As you like it, in Jacque’s well-known depiction of the Seven ages of man:

All the world’s a stage,
And all the men and women merely players;
They have their exits and their entrances,
And one man in his time plays many parts,
His acts being seven ages. At first, the infant,
Mewling and puking in the nurse’s arms.
Then the whining schoolboy, with his satchel
And shining morning face, creeping like a snail
Unwillingly to school. And then the lover,
Sighing like a furnace, with a woeful ballad
Made to his mistress’ eyebrow. Then a soldier,
Full of strange oaths and bearded like the pard,
Jealous in honor, sudden and quick in quarrel,
Seeking the bubble reputation
Even in the cannon’s mouth. And then the justice,
In fair round belly with good capon lined,
With eyes severe and beard of formal cut,
Full of wise saws and modern instances;
And so he plays his part. The sixth age shifts
Into the lean and slippered pantaloon,
With spectacles on nose and pouch on side;
His youthful hose, well saved, a world too wide
For his shrunk shank, and his big manly voice,
Turning again toward childish treble, pipes
And whistles in his sound. Last scene of all,
That ends this strange eventful history,
Is second childishness and mere oblivion,
Sans teeth, sans eyes, sans taste, sans everything.

Shakespeare scholar Kevin Gilvary10  argues that while the plays Much Ado about Nothing and Two Gentlemen of Verona are classified as Italian comedies, The Tempest should also be classified as a “Pastoral comedy derived from Commedia dell’arte”. Gilvary also correlates the characters of The Tempest with Italian comedy roles: Alonso with Pantalone, Ferdinand with Fausto, Antonio with Gratiano, Stephano with Pulcinella, Trinculo with Brighella, Miranda with Filli, and Prospero with the magician, and has pointed out the similarities in plot conventions in Shakespeare’s comedies and romances to those in the Commedia dell’arte, and their relation to popular folklore and myth.

Shakespeare incorporated the rich theatrical tradition of Commedia dell‘arte into some of his plays by basing some plots and characters on Italian pastoral scenarios. These sources were not translated into English and most of them were written in Italian vernacular or Paduan dialect. Most of Shakespeare’s scholars are able to explain Shakespeare’s knowledge of Italian Commedia dell’arte through John Florio, who owned the plays and comedies used by Shakespeare in his library and used them extensively in his works, by borrowing words and plots and adapting them for the English readers.